After over 2 months since the release of our new E.P entitled "The Lowest Level Of Loyalty" the support has been absolutely overwhelming. For the past year the studio schedule has been very very busy. working on remixes for other artists, tracks for compilations, as well as new Dirty K and Dirty K's pissed off little sister DERAILMENT. We are back and we mean business. You can still pick up a copy of The Lowest Level Of Loyalty on the Dirty K Bandcamp.. all support is greatly appreciated.

FORMS OF HANDS FESTIVAL 2018 was amazing its sad to think i will never stand on that stage again and play but time moves on. thank you to everyone who made it possible.

WGT was a blast thanks to everyone involved and thank for the support.

Well what a blast The holy Maschinenfest was, i had such a great time and met some totally awesome people, i feel sad that its all over now and i hope to play on that stage again one day, thanks to Udo, Nicola, Thomas, Grit for everything and to all our fans, freaks and friends for putting up with me all weekend!

Update: Here's another review For Torrent Of Fury read it Here

In other news, Dirty K have been confirmed on the Summer Darkness Festival line up, i am so excited to play this festival!

Update: Since Dirty K's successful appearance at FORMS OF HANDS 12 Festival and the release of the long awaited Torrent Of Fury CD album, it has been released just over a month now and it seems to have had the impact 1 had hoped for, i have already had so many great responses from it, 2 articles reviewing the CD can be read Here & Here We still have a few signed copies available, contact us at [email protected] Thanks for your support!..

Update:Promotion for our up and coming gigs...

Update: So we have a few anouncements!!..... its happened peeps, signed a reccord deal with HANDS label and we are now on the bill for both Form Of Hands 12 Germany and infest UK 2012!!! thank you very much for your continued love and support... you all rule!! 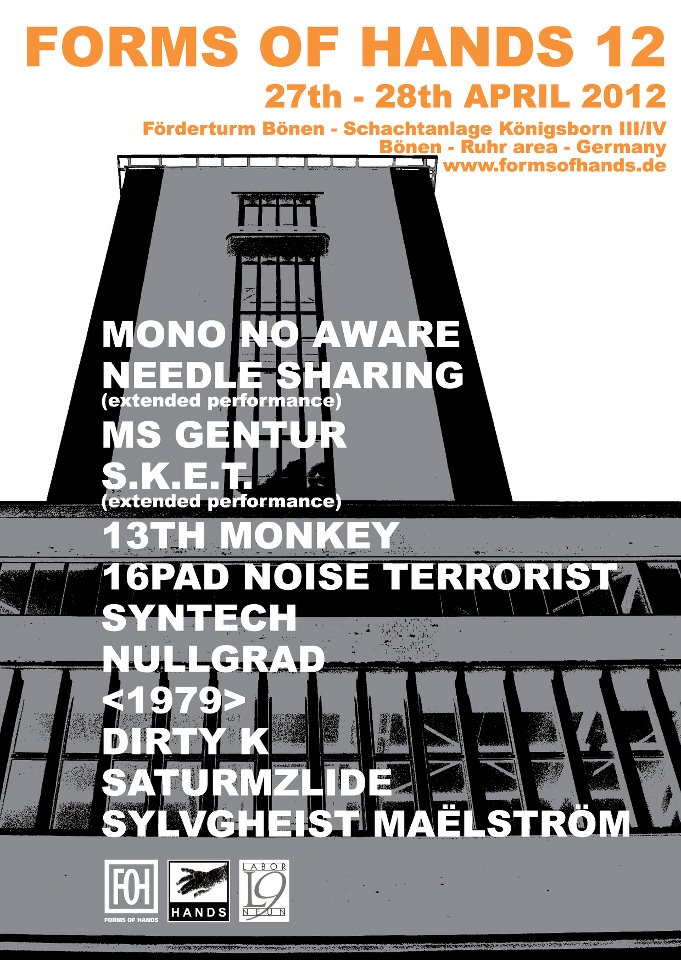 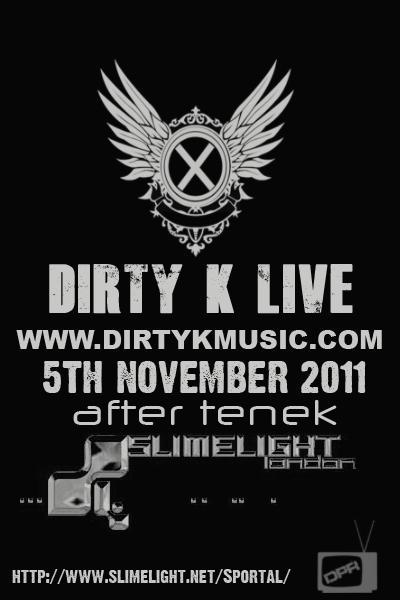 Update: had a total blast at antyscena in poland, thanks to everyone involved Ivon and pawel, we had a great time, great people, great music, great festival, great place.. we hope to visit again one day.. cheers poland..

Dirty K will now be playing a club show at slimelight on the 5th november 2011, we hope to see some of you there..

Update :Right then!! Has you may or may not know Dirty K will not be playing at the EBM Fanatics event on the 5th november 2011 in london, Due to issues way out of our control and promoters cancelling,
we would like to apologize to people coming to see us, we hope we can get something sorted ourselves for london soon!! 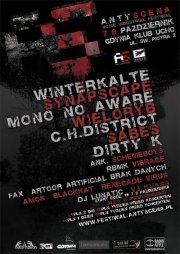 Update:Dirty K Have just been confirmed to play ANTYSCENA FESTIVAL in poland on the friday 7th october 2011, hope to see some of you there :)

Update : Thanks very much who came up for the angelspit, dirty k and cease2xist gig in sheffield.. we had fun. here is a review from the night click link to see.. REVIEW HERE 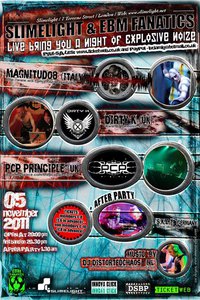 You asked for live shows this year, Now you have them! we have 2 absolutley awesome Gig dates, Dirty K have been confirmed for the following live shows,

Tickets for both events will be available soon..

Update: Due to circumstances totally out of our control, Dirty K will not be playing at Noise Explosion in Zizers on the 9th july, sorry to people that was looking forward to this gig, we where looking forward to playing.. This gig is now replaced with S.K.E.T, Dirty K, The PCP Principle and Magnitudo8 at Slimelight in London UK, on the 5th November 2011.

Update: Dirty K Have been booked to play at Synthetica, Leicester, UK on the 24th June 2011 with The PCP Principle, followed by a club night afterwards.. hope to see you all there..

Update: NEW STUDIO location move complete and ready to rock and roll... first up a remix for UK Duo Kommand & Kontrol, which should be done and dusted this weekend.. aswell as 3 half finished tracks we didnt get chance to finish before the studio move. it will be nice to actually work on music again after the last 2 or 3 month of pure hell, with only half our gear set up..

Update: all the best for 2011.. we hope this is going to be a great year.. see you on the dancefloor sometime this year.

Update: 20th November 2010 is our NEXT live show, Mono No Aware, Dirty K, Iszoloscope & Autoclav1.1 at slimelight london!!! DONT MISS THIS its going to be one killer night!

Update: Gigs confirmed for 2010, 17th september 2010 Dirty K with schultz vdrey and guests and the grosvenor sw9 london...2nd october 2010 dirty k live plus djs at [email protected] redeemer in leicester, 20th november 2010 With MONO NO AWARE, Iszoloscope and autoclav 1.1 plus djs at slimelight in london....

Update: Hello There, As you can see its been a while since the last update.. Right where to start? The New album is almost ready. Enititled "Ritual of Fear" We are in the process of finishing off the last track and waiting for one outstanding remix and the artwork, Then we will send it to the label for pressing. if you want to listen to some clips you can do so HERE Clips entitled Nasturtium, Room 308 Rue De Clignancourt and Evil Streak are amongst others on the new album including two remixes more info about those will be released soon as the album goes to pressing. We are also still looking for live gigs, so if you know anyone who runs an industrial/noize night or you want to book us for your venue get intouch. [email protected]

Update: We would like to thank everyone who attended Slimelight to support global noize movement,we had a really good time and feel a bit drained today haha also special thanks to all the slimelight crew for your hospitality, we hope to play there again one day.

Update: GIG AT SLIMELIGHT LONDON TONIGHT FEATURING LIVE PREFORMANCES FROM THE PCP PRINCIPLE & DIRTY K ASWELL AS 6 NOIZE DJS FROM ALL OVER EUROPE HOPE TO SEE YOU THERE..

Update: We would like to wish you all a happy winter solstice and best wishes for 2010. update on whats going on with us, the live set at synthetica on the 12th december went pretty well. Update on the schultz remix we did we made it into the 1st 3 and will be featured on his new album War and Sex due for release in february 2010 pre order is now available through The schultz mypace Also we have started writing new tracks for the next album we will put some new clips up on myspace early 2010 Take it Easy

Update: Compleated a remix for Schultz (fr) hopefully it will be on his new album. Also the new album is selling quite well. working on some more bits and we have a show Dirty K Live on stage at Synthetica @ Retribution leicester UK on the 12th december 2009.